No products in the cart.

“DIESEL OR GASOLINE is NOT the question anymore”

Not long ago we were going to buy a car from any dealer with the only question of whether to buy it Diesel or Petrol. Normally the decision only depended on calculating if the savings in diesel, according to the kilometers traveled per year, would compensate the higher price of the Diesel car.

Now the decision becomes much more complex, other social, environmental, and economic factors come into play and the range of possibilities that we have is much broader; we can choose between buying a DIESEL, GASOLINE, PROPANE GAS, NATURAL GAS, HYBRIDS, PLUG-IN HYBRIDS or even cars 100% ELECTRIC.

Something similar is beginning to happen in the GENERATOR sector. The consumer, sometimes moved by his environmental conscience and other times by the fear of the rise in the price of diesel, or by the increasingly frequent restrictions of circulation in the cities, now asks about all available alternatives and manufacturers, aware of this, they expand their product offer.

The pressure on Diesel increases every day. Some regulations already require engines installed in mobile generators (mainly rental generators and generators on trailers) to comply with phase IIIA emissions, imposed by the European Union itself and that affects the maximum limits of material particles in suspension and the levels of Nox and Co2 emitted.

For the moment, this is not a big problem in technical or economic terms for manufacturers, because the current limits are not very demanding, but this will not happen when we reach the imminent phase V, much more restrictive, and that already today It affects the engines of the machines for off-road use.

The adaptation of an engine for a generator that can meet phase V will mean, starting in January 2019, a very high price, both for the price of the engine and the technical complexity of incorporating it, given that there is that also includes all devices for post-treatment of exhaust gases, catalysts, particulate filters, urea deposits, etc.

That is why the big manufacturers propose the engines to GAS, cleaner than the Diesel, as an alternative to Diesel PHASE V and, for example, companies such as KUBOTA, one of the largest manufacturers in the world of small and medium power engines, commercializes a range of gas between 10 and 40 kVA.

In addition, as in the automotive sector, generators manufacturers are starting to offer hybrid models with accumulation banks that allow them to deliver electric power without having the engine running ( just as a hybrid car can advance without needing to have the engine started). In these cases, the savings depending on the hours of use of the generator can become very important, more than compensating the extra costs of the hybridization. 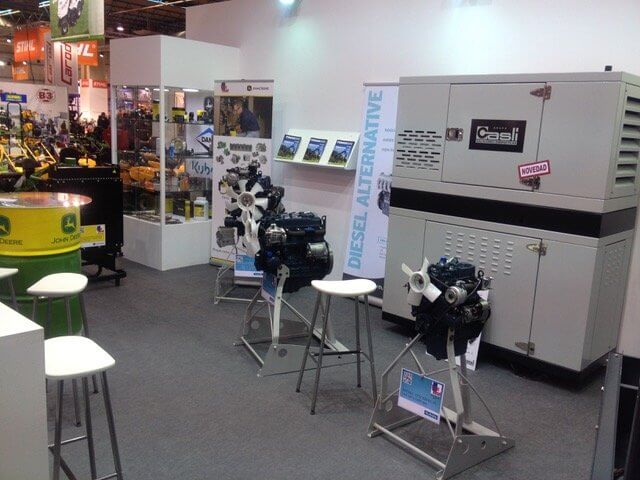 Likewise, hybrid generators, supported by photovoltaic solar panels or wind turbines for charging the batteries, further minimize engine starts. Following our analogy, they would be equivalent to hybrid plug-in cars.

And the fact is that the use of hybrid generators is becoming generalized in installations of all kinds: isolated network dwellings, telephone antennas, television antennas; and a much larger expansion is expected, as the available accumulation systems are developed.

Grupo Casli integrates in its range of energy solutions generators that incorporate certified diesel engines, natural gas engines or propane engines, all equipped with a bench of lithium-ion batteries. This evolution has been very important, since lithium batteries, in addition to being more durable than those of lead acid, allow more powerful and prolonged loads and discharges and, therefore, cause fewer engine starts.

And, even if the generator had to start, it would do so for a much shorter period of time, which greatly increases the efficiency of the hybrid system.

The ultimate goal will be to be able to generate all the necessary energy from renewable sources without the need of a support engine. They would be zero emission generators equivalent to 100% electric cars. Currently they are already offered for small powers combining photovoltaic, wind and batteries.

We observe, therefore, that the electricity generation sector is following in the footsteps of the automotive sector. Respect for the environment shown by citizens and by the institutions themselves forces manufacturers to develop increasingly efficient and environmentally friendly products.

Press the ACCEPT button to confirm that you have read and accepted our cookies.

This website uses cookies to improve your experience while you navigate through the website. Out of these, the cookies that are categorized as necessary are stored on your browser as they are essential for the working of basic functionalities of the website. We also use third-party cookies that help us analyze and understand how you use this website. These cookies will be stored in your browser only with your consent. You also have the option to opt-out of these cookies. But opting out of some of these cookies may affect your browsing experience.
Necessary Always Enabled

Any cookies that may not be particularly necessary for the website to function and is used specifically to collect user personal data via analytics, ads, other embedded contents are termed as non-necessary cookies. It is mandatory to procure user consent prior to running these cookies on your website.